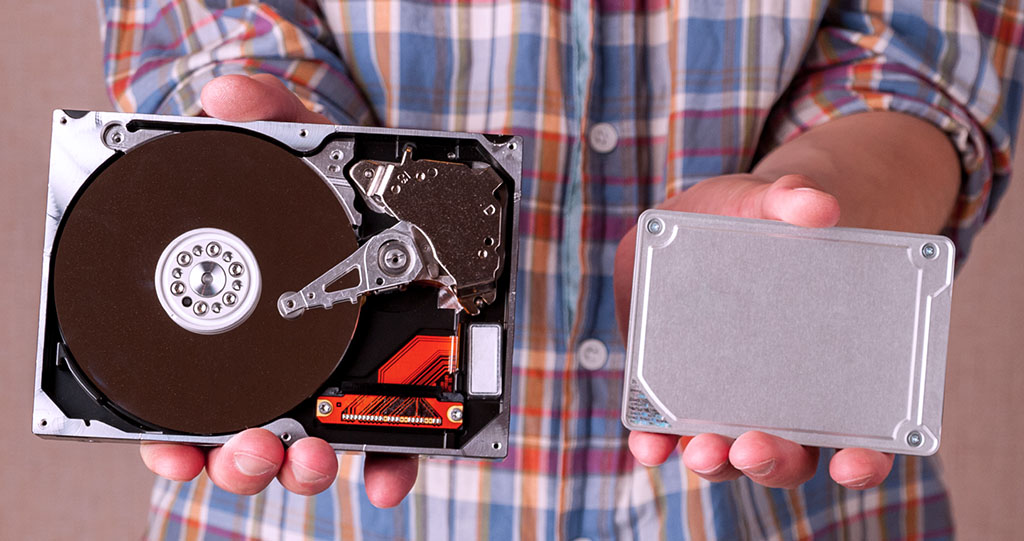 SSD Which is Best for you?

Learn the advantages and disadvantages of selecting an SSD vs. an HDD. Learn how an SSD can accelerate your computer from business solutions to gaming.

HDDs are a legacy storage technology that use spinning disks to read/write data.

Choosing the right storage isn’t just about comparing capacity and cost. The type of storage your computer uses matters for performance, including power usage and reliability. Solid state drives (SSDs) and hard disk drives (HDDs) are the two main storage options to consider. Here's a quick guide on the best use for each and how to compare."

What is an HDD

An HDD is a data storage device that lives inside the computer. It has spinning disks inside where data is stored magnetically. The HDD has an arm with several "heads" (transducers) that read and write data on the disk. It is similar to how a turntable record player works, with an LP record (hard disk) and a needle on an arm (transducers). The arm moves the heads across the surface of the disk to access different data.

HDDs are considered a legacy technology, meaning they’ve been around longer than SSDs. In general, they are lower in cost and are practical for data that does not need to be accessed frequently, such as backups of photos, videos or business files. They are available in two common form factors: 2.5 inch (commonly used in laptops) and 3.5 inch (desktop computers).

What is an SSD

SSDs got their name—solid state—because they use solidstate devices under the hood. In an SSD, all data is stored in integrated circuits. This difference from HDDs has a lot of implications, especially in size and performance. Without the need for a spinning disk, SSDs can reduce to the shape and size of a stick of gum (what’s known as the M.2 form factor) or even as small as a postage stamp. Their capacity—or how much data they can hold—varies, making them flexible for smaller devices, such as slim laptops, convertibles, or 2 in 1s. And SSDs dramatically reduce access time since users don’t have to wait for platter rotation to start up.

SSDs are more expensive than HDDs per amount of storage (in gigabytes (GB) and terabytes (TB)), but the gap is closing as SSD prices decline at a faster pace that HDD prices year over year.

What makes SSDs an increasingly popular choice is their speed. Across the board, SSDs outpace HDDs because they use electrical circuitry and have no physical moving parts. This leads to shorter wait times when you’re starting up and fewer delays when opening apps or doing heavy computing tasks. For example, the Intel SSD D5-P5316 is a 15.36TB enterprise-grade SSD that offers over 7000 MB/s in bandwidth. The 14TB Seagate Exos 2x14, a compatible HDD, offers only up to 500 MB/s in bandwidth. That’s a difference of 14x!1

These faster speeds lead to performance benefits in several areas, such as when logging in and waiting for apps and services to start up, or when performing storage-intensive tasks such as copying a large file. With an HDD, performance slows significantly, while an SSD can continue to work on other tasks.

Speed is also influenced by the interface used in an SSD vs. HDD that connects to the rest of the computer system when transferring data back and forth. You might have heard of these interfaces—SATA and PCI Express (PCIe). SATA is an older, slower, legacy technology, while PCIe is newer and faster. SSDs with PCIe interfaces will typically be much faster than HDDs with SATA because PCIe contains more channels to transfer data. Think of it like the number of cars that can go down a one-lane country road compared to a four lane highway.

Although no one ever complains that their computer is too fast, there are times when an HDD can make sense. If you have terabytes of files that you want to store, HDDs are still a less expensive option, although that’s changing with increasingly lower SSD prices and newer NAND technologies driving bit densities higher per NAND die. Computer storage decisions can be simplified by thinking of data as either cold or hot. “Cold” data might include the years of photos you want to keep on your laptop but don’t look at every day and don’t need quick access to. HDDs can be an excellent, cost-effective choice for cold data. At the other end of the spectrum, if you’re a business running real-time transactions, editing videos and photos and need fast access to a database of files, video clips, or models, or even just running the operating system, that’s referred to as “hot” data. The fast performance of SSDs makes them an ideal choice for when speedy access to your data is what matters most.

The degree of write wear to a NAND SSD depends partly on the state of data already on the drive, because data is written in pages but erased in blocks. When writing sequential data to a relatively new SSD, data can be efficiently written to successive, free pages on the drive. However, when small blocks of data need to be updated (as in revising documents or numerical values), the old data is read into memory, revised, and then re-written to a new page on the disk. The old page, containing deprecated data, is marked invalid. When free pages are no longer available, those “invalid” pages are freed up for use in a background process called “defragmentation” or “wear leveling.” All existing valid pages in a given block must first be copied to other free locations on the drive so that the original block only contains invalid, deprecated pages. The original block can then be erased to free up space for new data to be written.

Internal NAND housekeeping processes like wear leveling lead to write amplification, where the total internal writes on an SSD are greater than the writes required to simply place new data on the drive. Since every write slightly degrades individual NAND cells, write amplification is a primary cause of wear. Built-in processes help NAND SSDs distribute wear evenly across the drive. But the bottom line is that write-heavy workloads (random writes, in particular) cause NAND SSDs to wear out faster than other input/output (I/O) patterns because they result in greater write amplification.

Good news is SSD drive level endurance is always specified while keeping the worst case random write patterns in mind. For example, when you hear a drive can do one Drive Write per Day, that means you can write at least one full drive worth of data using that random write usage everyday during the drive’s warranty period (typically 5 years).

When it comes to capacity, SSDs for computers are available in 120GB to 30.72TB capacities, whereas HDDs can go anywhere from 250GB to 20TB. When measuring cost per capacity, HDDs come out on top, but as SSDs drop in price, this will become less of a differentiator for HDDs. However, with SSDs, you get much more work done per server which results in fewer devices deployed to get the same output as an HDD. The result? SSDs have a lower TCO (total cost of ownership).

Reliability is defined as whether data is stored as intended, in an uncorrupted state. SSDs in general are more reliable than HDDs, which again is a function of having no moving parts. That’s because without movement, SSDs aren’t affected by vibration or related thermal issues.

SSDs commonly use less power and result in longer battery life because data access is much faster and the device is idle more often. With their spinning disks, HDDs require more power when they start up than SSDs.

It is well understood that SSDs perform significantly better than HDDs. Almost as well understood is the reliability advantage of SSDs. Given these intrinsic advantages, SSDs do not need replication for performance, and they generally require much less replication for reliability. Higher SSD performance also lends itself to much more efficient data-reduction methods than HDDs. Data reduction is the ratio of host data stored to physical storage required; a 50 percent ratio would be equivalent to a 2:1 data-reduction ratio. Because data reduction allows the user to store more data than is on the physical hardware, the resulting effective capacity is increased. Compression and deduplication technologies can greatly decrease the required raw storage capacity needed to meet a “usable capacity” requirement.

Modern algorithms are optimized for SSDs, taking advantage of their performance to enable a high data-reduction ratio (DRR) while delivering high application performance. For example, the Zstandard compression algorithm from Facebook achieves compress and decompress speeds much faster than HDDs can read/write, thus allowing the use of the algorithms on SSDs in real time.2 Another example is VMware vSAN, where compression and deduplication are only offered in all-flash configurations.

SSD vs. HDD: Which Is Best for You